Last Saturday, we settled into the Mattress Factory Café to start off a new season of Coffee Dates and chat with Australian artist Stephen Bram, one of the exhibiting artists in the recently opened Factory Installed show. Stephen’s piece, "Third floor West gallery 500 Sampsonia Way," is an architectural installation that uses shifted perspective to create a three dimensional space of smooth white walls and exposed timber. 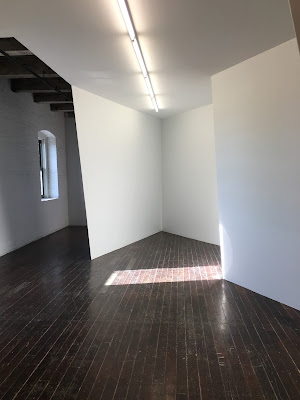 We started the morning with an insightful discussion about the similarities and differences between Pittsburgh and Stephen’s hometown of Melbourne. As usual, conversation was accompanied by piping-hot coffee from Commonplace Coffeehouse, teas from Arnold’s Tea, and fresh donuts from Priory Bakery. After we had our fill, we headed up into the gallery to see Stephen’s piece and to talk about it in the gallery space. Because the piece had just opened the night before, most members were seeing this room-sized structure for the first time. 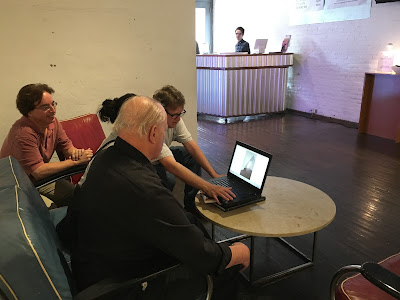 Stephen answered numerous questions about the construction and design of his piece. One of his favorite aspects of "Third floor West gallery 500 Sampsonia Way" is the way that the structure interacts with each of the permanent installations that surround it. Whether the pieces deal with perspective, like James Turrell and Sarah Oppenheimer's works, or an autobiographical concept, as with Greer Lankton's work, he appreciates that almost everything on the third floor can connect in some way.

Members, be sure to RSVP for the next Coffee Date this Saturday, October 8th, with Mohammed Musallam. We hope to see you there!
Transmitted via Unknown at 11:51:00 AM No comments: