Robert Farris Thompson is America’s most prominent scholar of African art and its influence on American and Caribbean art and music. In the preface to Thompson’s forthcoming book, Aesthetic of the Cool: Afro-Atlantic Art and Music, publisher Gloria Kury calls him a living legend, and based on what I’ve read, I’d say that description is right on target. 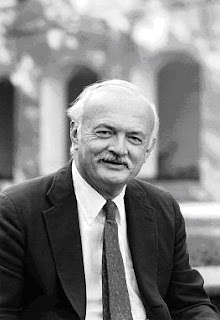 He has published eight books on topics ranging from the art history of the Yoruba people of southwestern Nigeria (Black Gods and Kings, 1971) to the cultural history of the tango (Tango: The Art History of Love, 2005). The Master of Timothy Dwight College at Yale, Thompson also authored an introduction to the diaries of Keith Haring and studies the art of Jose Bedia and Guillermo Kuitca. He has been anthologized fifteen times and was given the 2007 “Outstanding Contribution to Dance Research” award by the Congress of Research in Dance.

Which is why we are thrilled to announce that Thompson will be visiting the MF this February for a tour of Queloides and a discussion! Dr. Thompson will present The Edge of the Road is Listening: The Art and Origin of an Afro-Cuban God. He will also be speaking about his almost-at-the-printers book, Aesthetic of the Cool, which collects the best of the essays on Afro-Atlantic art and music that he wrote from 1963 to 2006.

The evening is sure to be incredible; Gloria Kury recalls waiting outside one of Thompson’s classes at Yale and being bombarded by the sounds of music punctuated by thunderous applause. Not to mention my recent Internet search that yielded images of Thompson dancing the tango during several different lectures!