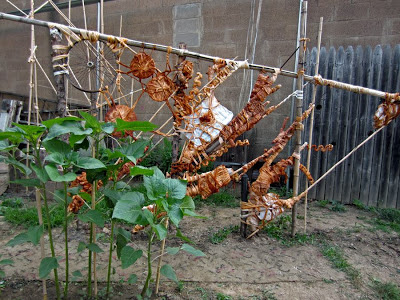 Originally, the GardenLabs project began when I transplanted potatoes from a former project to 516. Once GardenLab@516 ended, I made elements of that project portable and moved them to 510. During GardenLab@510's first year, I observed the natural conditions of the site and then worked with those conditions to maximize the success of a garden in that space. I also kept some of the elements that already existed in that space: some plants and some man-made items. In contrast to 516, the garden at 510 is not completely enclosed. This has allowed for more community access: there have been tours, an ArtLab performance with children dressed as bees, and many impromptu conversations with neighbors passing by. As this became apparent to me, I wanted to show appreciation to my neighbors so I grew communal herbs. This year's focus at 510 is on the garden as a studio. I'll be making work in a bean house that will house a workbench. Some of the work that I make could make its way back into the community...

Clancy works with aspects of gardening, but she does not consider herself a gardener. She makes choices in her GardenLabs primarily on how: elements can be metaphors for her personal history, how plants respond to being neglected or nurtured, and also how the community responds to the plants and overall project. While Clancy highlights the conceptual aspects of her GardenLabs, she recognizes that she is working with actual plants in a real neighborhood and that she must be sensitive to how this ecosystem evolves. Her choices affect nature and the neighborhood, and their evolution affects the practical and conceptual choices in her artmaking. Clancy invites visitors to stop by anytime, but encourages people to make more than one trip since the space changes so much from week-to-week.

Check out images of GardenLab@510 on Rose Clancy's Facebook page.