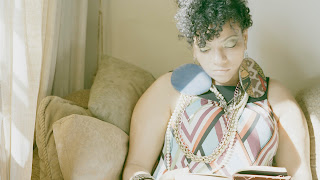 The sixth and final installment of Screenings is up in the lobby through May 23. The exhibiting artist for the next two weeks is photographer Carrie Schneider. Based in Brooklyn, New York, Schneider created the video, Reading Women, a work in progress of 50 women reading books written by female authors.

I was able to snag Exhibitions Manager Owen Smith to get his thoughts on Schneider’s work, and also some closing sentiments on Screenings.

CAITLIN HARPSTER: Carrie Schneider works primarily in photography, so video work is a relatively new exploration for her. How do you think she did?

OWEN SMITH: I wanted a still photographer for one of the screenings because I wanted to see what they would do. Carrie is a photographer, yes, but what she really is doing is studying a subject, almost in an anthropological kind of way. She is the only person I know who has been to every neighborhood of Pittsburgh and photographed it. She has been working on this great photographic series of houses--88--in Pittsburgh that documents the identical underlying structures, along with how the houses have been personalized over the years and now appear very different with their own rich social history.

She approached Reading Women in a similarly rigorous way. She documented the women reading in multiple ways. She had an idea of something she wanted to study but was unsure of the final form. She has been taking photographs of the women as well as video documentation. This is something she has been working on for a very long time. It is a work in progress.

CH: How did she determine how long to focus on one women over the next?

OS: The reason for the length of each clip is one page-turn. So it depends on what they are reading and how they are reading. It’s a very structural concept of editing, which pairs nicely with the photographic series Hands. You see the photographs of the hands of the women and the way each woman holds the book. There is a complimentary body of work with this video. Carrie is exploring multiple ways of how to document and present one single subject.  I like her practice.  It is a very thorough, almost scientific type of practice.

CH: Reading Women is kind of like a series of portraits.

OS: They are always portraits. Even when she was documenting the houses for 88, that was a form of portraiture. The high art of portraiture is not just depicting the likeness of a person or thing, but capturing the personality within it. I think that is what she is really trying to explore, what creates the personality of each woman. She is showing us not only how each woman is reading, but what she chose to read as well. The idea is that you are getting a portrait of this person in her own kind of head-space, where she feels completely engaged and unaware, empowered almost, while reading her favorite book by a female author. Coincidentally, Carrie’s work pairs very nicely with our Feminist And… exhibition.

CH: This is the last work in Screenings. Overall, how do you feel about the screenings and how they were received?

OS: I was really happy with it all and would like to do another screening series again in the future. I was really excited with the variety of works produced. It has been really lovely working on this project and I think everyone involved really enjoyed doing it as well. I wanted the idea of the “gesture” to act as a guideline for artists to produce something that was a little bit of a sketch, something quick, or challenge them to show something that were not necessarily prepared to do, like how Carrie showed a work in progress.

CH: I also feel that the “gesture” shows the viewer a different perspective on the working artist. For example, the work Tzarinas of the Plane exhibited, Meditation on the Making of Madness, which actually incorporated their artistic process as part of their video.

Overall, it has been a lot of fun.  There is a little bit of “the art of the exhibition” that I might change or do differently in the future that might benefit the artist but I am really amazed and grateful that so many people put so much effort and dedication into this series.