Once Upon A Mattress: The Road Trip

James Turrell's 1983 Mattress Factory residency (previously discussed here, here, and here) produced seminal artworks Danaë and Pleiades, which stand as core pieces within the museum's permanent collection.  Moreover, the residency forged a warm and lasting friendship between Turrell and the Mattress Factory Co-Directors, Barbara Luderowski and Michael Olijnyk.  This friendship not only served as a catalyst for the numerous collaborations that have occurred over the years between the Mattress Factory and Turrell, but it also illustrates how the Mattress Factory works with artists.  As if with friends, the Mattress Factory aims to share and build a mutually supportive and inspiring environment where art can be created, appreciated, and developed with some smiles, laughter, and a few surprises along the way.

When his residency ended, Turrell agreed to exchange ownership of Pleiades for Barbara's stash of aged black walnut and a giant, motorized 10-foot band saw, which came with a huge motor and a joiner.  To transport all the wood and machinery to Turrell's studio in Arizona, Barbara, Michael and Turrell rented a U-haul truck and the three set off on a cross-country journey.  Barbara recalls that all along the way, after every meal and pit stop, they would race each other back to the truck, each aiming to avoid the dreaded middle seat where one had to straddle the truck's manual stick shift.  They had originally planned to explore little towns along the way in a Jaguar Turrell bought in Connecticut before the trip.  However, the Jaguar dropped all its oil before they left the Mattress Factory, so it was rigged behind the U-haul for the whole ride. 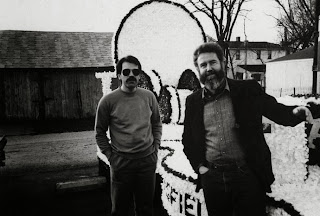 Michael and Turrell with parade float encountered during road trip 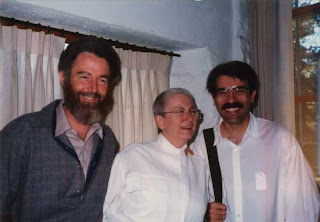 James Turrell with Barbara and Michael after arriving in Arizona

Whether it was the laughs they shared along the road trip or the mutual appreciation they discovered on their first meeting, the Mattress Factory and James Turrell found in each other a natural friend and collaborator.  Turrell enlisted the help of Michael to install his piece Meetingat PS1 in Long Island City and again when Turrell exhibited at the Hirshhorn Museum and Sculpture Garden in 1986.

In 1994, Turrell returned to the Mattress Factory to exhibit his works Soft Cell and Catso, Red.  A part of Turrell's Perceptual Cells series, Soft Cell is an enclosed, autonomous space with room for only one person at a time. The series explores how perception of space is influenced by light[1]. 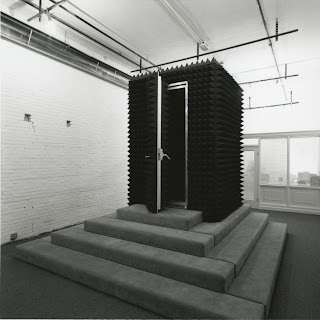 Exhibition photograph of Soft Cell, 1992 at the Mattress Factory in 1994

Catso, Red, which was designed in 1967 as part of a series of Cross-Corner Projections, was added to the Mattress Factory's permanent collection in 1994. 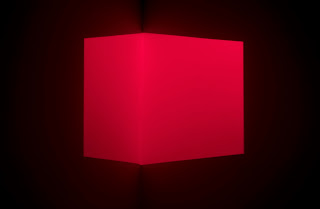 The friendship and collaboration between James Turrell and the Mattress Factory culminated in 2002's James Turrell: Into the Light, a year-long exhibition presenting a variety of newly created and older works re-imagined for the Pittsburgh audience.  We'll hear more about that mega-show in our next posting.

[1]  http://jamesturrell.com/artworks/by-type/#type-perceptual-cell
Transmitted via Unknown at 1:50:00 PM

Email ThisBlogThis!Share to TwitterShare to FacebookShare to Pinterest
Categories: ARCHIVE, EXHIBITIONS, JAMES TURRELL, MOLLY, ONCE UPON A MATTRESS, PERMANENT COLLECTION